African Opera is finally here. The world’s first opera written in pidgin English, the language spoken by over 50 million people across Nigeria, Ghana, Sierra Leone and Liberia came to London last week as part of the movement of Afrofuturism. 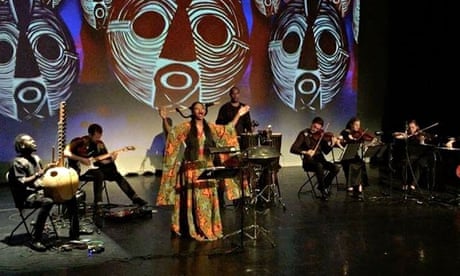 Afrofuturism brings together elements of astral jazz, African-American sci-fi and psychedelic hip-hop and amasses these genres into a new philosophy of alternative visions of an African tomorrow. Song Queen: A Pidgin Opera is Nigerian-born Helen Parker-Jayne Isibor’s (or, The Venus Bushfires  as she is also known) contribution to the movement.

Isibor says she was inspired to create it after watching a recital of the Wagner opera, Parsifal.  Following that, it took her over four years to write an opera as closely associated with classical Romance languages could blend with Pidgin authentically.

“I went to the opera wearing my ankara,” Isibor told The Guardian, “And I thought, actually, I’m going to pidgin this entire situation up!”

The final result is impressive, if not strange to ears unused to it. The opera is based on the West African folklore of Mama, a story about water spirits that lure men or sailors to their deaths.

“My grandmother knew so many Mami Water stories because her own mother had told her these stories too,” Isibor explained, her hair spun in the signature elaborate updos she sports on stage. “It’s everywhere from Greek mythology to mermaids, so it’s something that translates well across the board.”

Isibor says she was also inspired by the Nigerian Afrobeat godfather, Fela Kuti, who championed the pidgin language with albums that carried heavy political messages such as Why Black Man Dey Suffer. According to the Guardian, Kuti once told a biographer: “Good English [can]not convey the message of African music.”

“A lot of people [in Nigeria] said, why do you want to sing in pidgin? And I thought, well, why not? It’s the language the average Nigerian understands,” said Isibor.

“You’re the Pavarotti of Nigerian opera!” exclaimed one happy viewer post-show last week. And perhaps, indeed, she is.