Inspiration to achieve often comes from the need to survive but sometimes, for some, like Nike Okundaye, it is simply passed down through generations and comes as naturally as the sun and the moon, leading to greatness and a legacy which continues to inspire.

Nike Okundaye was born into a family of craftsmen and women in a small, unknown rural village in Kogi State, Nigeria. Raised by her grandmother when her mother passed away when she was just six years old, Nike learned how to weave traditional adire and indigo textiles at the same age.

“I started with weaving different things, including adire, a traditional Yoruba hand-painted cloth design. As a matter of fact, I can say everything that had to do with textile, she told News Across Nigeria, “They taught me how to weave, using a little calabash. Gradually, I graduated to using bigger materials.”

Nike’s grandmother trained her to expert level and Nike took her skills on to become a world-renowned expert in indigo and adire textile dyeing, making, weaving, painting and embroidery. In 1983, She opened the famous Nike Centre for Art and Culture in Osogbo, Osun State where today she trains young Nigerians free of charge in the traditional arts.  The centre was originally opened to just 20 young girls saved from a life of poverty on the streets. Now, according to Nike, she has trained over 3,000 young Nigerians.

Nike first exhibited at the Goethe Institute in Lagos in 1968 and since has travelled the world international art circuit, exhibiting and giving talks about the traditional Nigerian art and design including beadwork and batik, exhibiting across Europe, in Belgium, Germany, Italy and as far as Japan and the USA.

She was awarded one of the highest national awards of merit by the Italian government in 2006 for her contribution to helping combat the problems the country faced with Nigerian sex workers who came to the country in search of better opportunities and ended up on the streets. Nike gave classes and tuition in art making and many sex workers were able to forge new careers to support themselves. 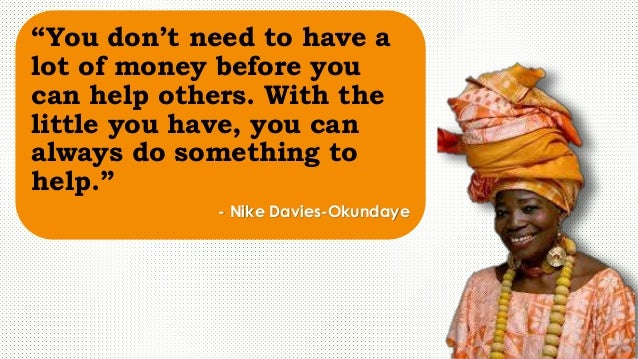 To add to her impressive list of accolades, the world’s largest museum, The Smithsonian based in Washington DC, recently accepted two of her adire paintings and some of her pieces can even be found hanging in the White House.

Nike told The Nation, about some of the best things to have happened to her, which includes meetings with the former US president, Bill Clinton. She said: “When President Bill Clinton of the US visited Nigeria, he asked to meet the woman behind Nike Gallery, and I was taken to Abuja to meet him. It was the same thing with President George Bush. I was invited to meet him in Abuja during his visit to Nigeria. I was the one that decorated the room where the president stayed during the visit. What honour can be greater than this? I feel accomplished.