Baloji – poet, composer-lyricist/beatmaker, scriptwriter, actor and performer, video artist and stylist. A creative African bomb. Baloji is the Congo’s answer to Prince. He walks, talks, breathes – no oozes, style. His music gives the listener note after note of pure unadulterated…deepness. Truth. If you know a good beat or lyric when you hear one, you’ll be orgasming or crying when you hear this man’s music.

Balogi has released two successful albums. Hotel Impala (2008) was his Congolese reinterpretation (Kinshasa Succursale, 2011) and was awarded 4 stars by the world’s press (NYT, Guardian, El Pais, Les Inrocks..). After  taking his debut baby to the world in more than 200 live international shows, Baloji is back with his new album. And it will spray his soul all over your ecstatic face.

A complete fusion of traditional African music he transcends the standard afrobeat by taking his western influences way back to a time when western music still had soul funk and jazz. However, he has double-crossed his fusion with new beats, electronic disco speaking babies which take you down to a level so deep you’ll get locked in and. just. listen. 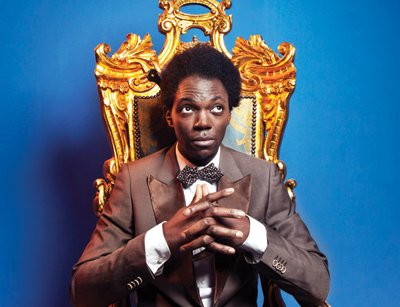 According to his website, ‘Baloji’ means “man of science” in Swahili, but during the colonial period, that meaning shifted to “man of the occult sciences and sorcery”. The name says it all. Baloji is a master at mixing and produces his own music of ‘cross-fertilisations’ as he calls them. Hybrids of soul collaborations of movement – free from all labels, indeed.

Check out his latest video below. 64 Bits and Malachite. Simply: visually decadent and motivating . The Belgium-based Congolese rapper/poet  knows how to evoke with imaginative cross-culture juxtapositioning in clothing, behaviour and language. He tells of his countries struggles, silencing any prejudgement with his poetic, stylish truths. He gives us ‘Black Excellence’, proudly. The track was co-produced by Metronomy bassist Olugbenga, Baloji and singer-songwriter Petite Noir. The story goes they go in search of a statue of British explorer HM Stanley, and along the way come across the performance collective Kongo Astronauts. We dare you not to love him.