Kudzanai Chiurai is a fearless artist using his talent to speak up for the politically muted, for his country and people.

One of the ‘Born Free’ generation of Zimbabwean artists, Kudzanai was exiled from Zimbabwe after he bravely decided to create a portrait of the country’s dictator president, Robert Mugabe. The piece was considered to be so inflammatory, he was chased out of his home country to south Africa, where he became the first black student to receive a Bachelor of Fine Arts degree from the University of Pretoria. 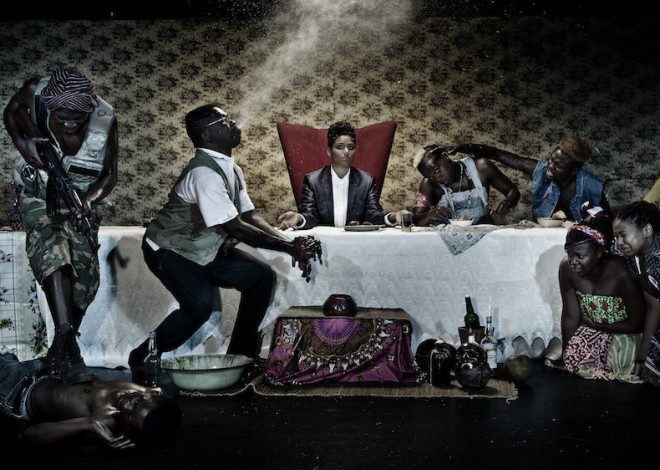 Like Tracey Rose, Kudzanai also uses multimedia to create stunning and dramatic compositions which challenge the social and political culture of his home country but also the wider southern African region. No subject is off bounds: from government corruption to xenophobia and displacement Kudzani’s work discusses the daily struggles he sees around him in a brutally honest and startling fashion through a mix of digital photography, editing and printing, painting, and film. You can check out his latest piece here which is This is not Africa, this is us. The film was part of a three-part exhibition which uses video installation and took place in Rotterdam and The Hague last year.

His films deal with his psychological and physical experience of living in the inner city of Johannesburg.

Kudzanai has showcased many solo exhibitions including ‘State of the Nation’, agt the famous Goodman Gallery project space, Arts on Main, Johannesburg (2011); ‘The Harvest of Thorns’, The Assylem Atelje, Johannesburg (2012) and ‘Front Page’, Mallorca Landings, Spain (2013).

He also has also exhibited at the Cairo Biennial, Cairo (2010); ‘Figures & Fictions: Contemporary South African Photography’, and at our very own Victoria and Albert Museum, London in 2011. He also showed the ‘eMerging: Visual Art and Music in a Post-Hip-Hop Era’ at the Museum of Contemporary African Diasporan Arts, New York in 2013.